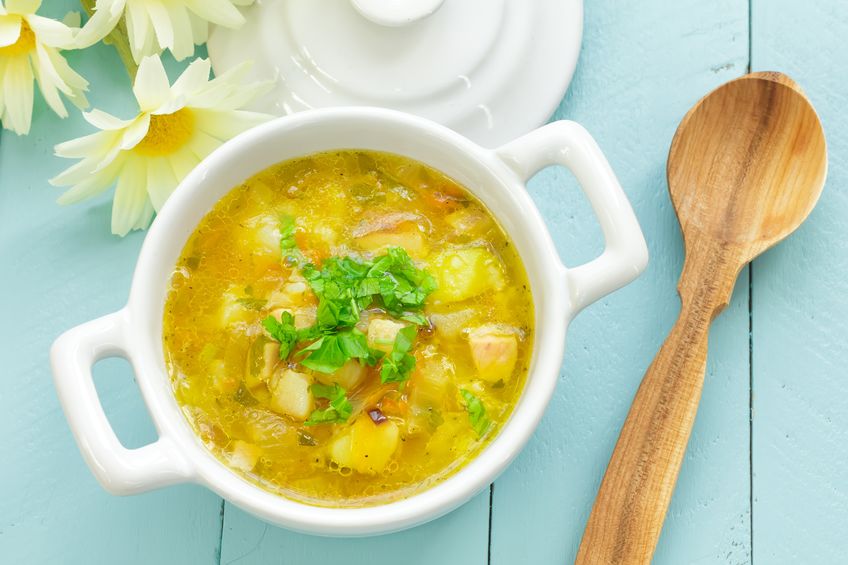 Last week my husband had a bad cold, with many of the flu-like symptoms. Chicken soup works wonders, so I thought I’d share two chicken soup recipes with you.

With bed rest he couldn’t do otherwise, because he couldn’t stand, with homeopathic remedies and essential oils, with lots of tea – I have a special recipe, he healed pretty quickly. I think it also helped that the first couple of days he ate nothing, he just hydrated and lay down. Our bodies know what to do in crisis situations to recover. We just have to leave them.

When the chills and fever subsided, the first sign of healing appeared, he was hungry. I thought his favorite pork neck was out of the question and thought about what I could feed a convalescent to help him heal, without causing him a biliary crisis. And I decided to go for the famous chicken soup. For me, chicken soup, especially given therapeutically, is an American movie cliché. At the time when I was being treated during colds, huh, that is, in childhood, my mother, when she had a chicken, she made it steak or bread or ostropel. Or a little bit of everything. In our house, the soup was made only of chicken. From the fattest hen in my grandmother’s yard, which had been laying eggs for several years, she had produced dozens of chickens and died of old age.

So I ate chicken soup as a first surprise.

My grandmother, who raised chickens, died a long time ago, and I don’t dare buy chickens at the supermarket, so I chose a dwarf chicken, also known as coquelet de Bretagne. I hope maybe there is a breed that grows faster and no longer needs to be drugged with hormones. Either way, you can feel the difference in taste, like with the loan. But, as I always say, less is more.

Then, a nice little coquelet, washed, extraparled and boiled. This little chicken is very tender, it doesn’t need to boil a lot. After about 15-20 minutes I also added the vegetables, clean and washed of course, but whole this time, because I wanted to make a clear soup. And I said that if it is still a therapeutic soup, leave it alone with everything, and I put it like this: at the beginning an onion, a carrot, a parsnip, parsley from the stem, celery and a little celery. After 15 minutes I added a potato, two small champignon mushrooms, half a courgette, half a green pepper, two sheets of cabbage, a bunch of cauliflower and a broccoli. After they are all boiled, I put a pinch of salt and a bunch of washed but whole parsley, I boil for another minute and that’s it!

I removed the vegetables, parsley and meat and here is the clear soup! For the design, I still chopped some green parsley and put it on top.

I put the mixer in the remaining vegetables, chopped them and blended them well with a soup ladle, 200 ml of sweet cream and a pinch of salt. On top I put the chicken meat, which I cleaned from the bones and cut into small pieces. Here is the vegetable cream with chicken!

When serving, place a tablespoon of fermented cream in each bowl of hot soup.

The girls asked me to make croutons too. I didn’t have time because both soups were finished. I promised them that for sure, I will do them next time!

If you also want to make croutons, you will need two large slices of bread cut into cubes, sprinkle with a teaspoon of olive oil and a pinch of salt, put them in a pan on baking paper in an oven preheated to 180 degrees for a few minutes.

Since it’s still cold season, let it be the chicken soup!